The Electoral College’s Role in US Elections

The Electoral College has been much talked about in both the 2016 and 2020 election cycles and probably now more than ever, as the results of the recent political climate has been two presidents elected without popular vote plurality.

Though this almost seems baked into the modern national political ecosystem, the notion of the electoral breaking with the popular vote seemed almost academic until 2000. Since, it has been a reality of great significance.

What is the electoral college?

In total, there are 538 votes cast for President currently. 535, two for each state and one for each congressional district. In addition, 3 further electoral votes are cast on behalf of the voters of Washington D.C.

If any candidate receives 270 electoral votes, they have won the presidential election.

It is possible, though highly unlikely, for an electoral tie of 269-269. In this case, or if no candidate receives a majority under some other circumstance, the presidential election is decided by the congress, with the House of Representatives casting 1 vote per state for president and the Senate deciding the vice president, each casting a vote for that office.

What is an electoral vote? 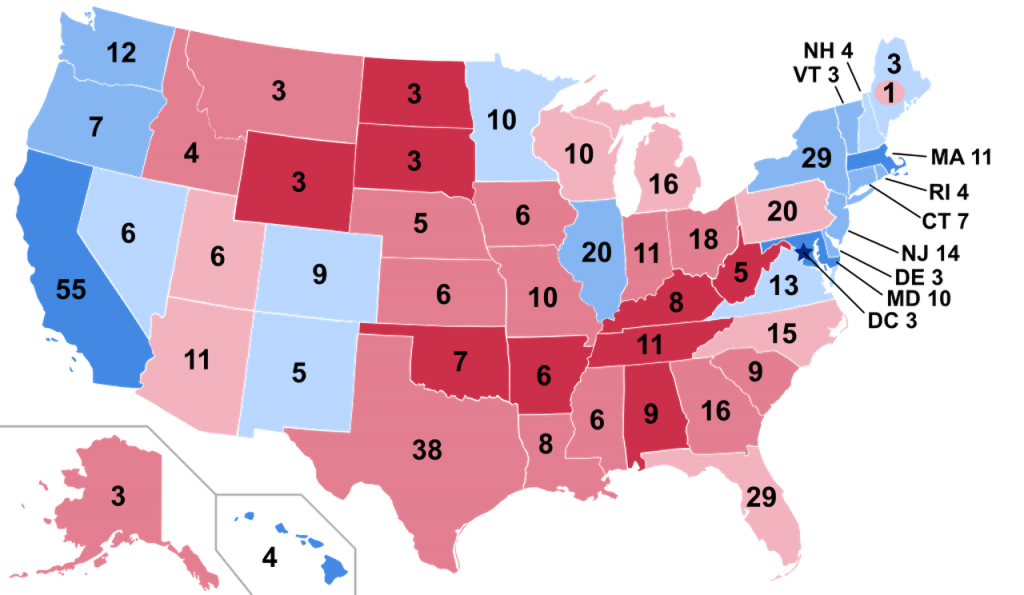 An electoral vote is a vote cast for President by an Elector on the behalf of a district or a state.

The electoral votes are cast by an appointed individual representing each district or state. Each state receives a single vote for every representative they have in Congress, with a minimum of three. The larger the population, the larger the total number of electoral votes:

Washington D.C. is the only region represented by an electoral vote which is not a state. Washington D.C. is currently entitled to the number of electoral votes it would receive if it were a state, though limited to no more than any other state. This means that if the population of DC were to grow to include enough people to warrant 2 congressional districts (1.42M people), it still wouldn’t get another electoral vote because it is limited by statute currently to 3.

Currently in most states, laws dictate how the Electors are selected and the constitution states such individuals must not currently hold state or federal office. In most states, laws exist directing the Elector to cast a vote for the candidate receiving the most votes, or a plurality, in the district or state.

History of the Electoral College

The electoral college began as a compromise regarding the question of the election of the President. Initially, presidential elections and the electoral college did not have the same relationship they have to voters today. Voters would vote for their Elector district by district, and those Electors would then “examine” the field of candidates and cast a vote on behalf of the district they represent.

These votes would be cast at the State Capital and in the early days of the United States, some state’s presidential electoral votes were decided by their state legislatures. But most were decided by Electors representing a congressional district and voting into their position through a plurality of votes on election day.

Over time, states began to switch to winner-take-all electoral vote casting as a means to enhance the chance of the state favorite winning the electoral votes needed to win an election.

This was considered contrary to the concept of the electoral college’s intent by several of the framers, but, despite this, it has become the means of allocating electoral votes by the states.

Future of the Electoral College

There is much controversy regarding the electoral college. It has been faulted for securing the political duality, and for subverting the will of the people by allowing presidential candidates to win the office without a plurality of voters’ support.

Supporters of the electoral college make the case that the current electoral system gives a voice to otherwise under-represented rural voters and states, and prevents the urban voter from dictating their will upon rural voters. The country is supposed to be The United States, so the idea that each state has a proportional say in the President – the electoral college respects the nation as a cooperation between more autonomous states.

This view, it ought to be noted, is more popular with conservatives as the electoral college does, in most cases, advantage Republicans in the current political environment.

Opponents would say that, in effect, those same rural voters are able to exert disproportionate will and representation in both congress and the electoral college to the dismay of the majority of voters in the U.S. on two significant occasions within the past 4 presidential races, greatly altering the trajectory of the government against popular will.

Currently, the effort to eliminate the influence of the Electoral College has come in the form of the National Popular Vote Interstate Compact.

The NPVIC has recently won a potentially major court victory at the supreme court, but still lacks the total number of electoral votes to become enacted.

So what if an Elector tried to vote against the candidate they are pledged to vote for? Well, just that scenario played out several times recently in 2016.

Electors refusing to vote for the candidate they had pledged to vote for are known as “faithless electors”. The U.S. Supreme Court recently heard cases regarding just such a scenario, in Chiafalo V. Washington and in Colorado Department of State V. Baca.